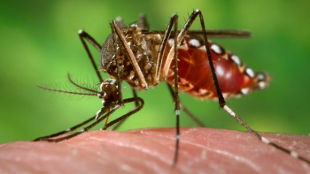 Female Aedes aegypti mosquito during blood mealWIKIMEDIA, JAMES GATHANYPeople who claim that mosquitoes just love them may be onto something. According to a new study of a few dozen pairs of twins, genetics may play a role in whose blood a mosquito chooses to dine on.

“Twins that were identical were very similar in their level of attractiveness to mosquitoes, and twins that were [not identical] were very different in their level of attractiveness,” study coauthor James Logan, a medical entomologist at the London School of Hygiene & Tropical Medicine, told NPR’s Shots. “So it suggests that the trait for being attractive or unattractive to mosquitoes is genetically controlled.” Logan and his colleagues published their results this week (April 22) in PLOS ONE.

The fact that mosquitoes—specifically, female mosquitoes, which feed on blood to nourish their eggs—are more attracted to some people than others has been...

Logan and his colleagues compared mosquitoes’ attraction to 18 pairs of identical twins and 19 pairs of fraternal twins by having the siblings stick their hands in either side of a Y-shaped tube. Aedes aegypti were then released from the long arm of the Y. While the mosquitoes showed no preferences among genetically identical twins, they often preferred one fraternal twin over the other. Logan now plans to investigate which genes may be behind the difference.

“Once we identify the genes involved, we may be able to screen populations to better predict the likely level of risk of being bitten, which is directly correlated to transmission of diseases like malaria and dengue,” Logan told Smithsonian.com.