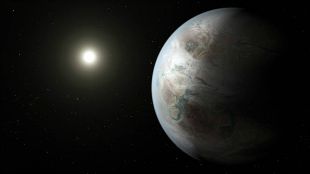 NASA AMES/JPL-CALTECH/T. PYLENASA scientists have discovered a planet more similar to Earth than any other yet documented. Kepler-452b, as it’s called, is 1.6 times larger than our planet and has a year that’s approximately 385 days long.

“Today, the Earth is a little less lonely, because there’s a new kid on the block,” Jon Jenkins, the Kepler project’s data analysis lead, told reporters at a news conference last week (July 23), according to The Christian Science Monitor.

The planet is 1,400 light years away in the Cygnus constellation. Its sun, Kepler-452, is quite similar to our own, with the same temperature and a diameter 10 percent larger. According to Science, Kepler-452b is estimated to have five times the mass of Earth, with twice the gravity.

“It’s awe-inspiring to consider that this planet has spent 6 billion years in the habitable zone of its star; longer than Earth....

Although scientists are excited by the finding, “because of its size and distance, it is unlikely that we will find out more about Kepler 452b for a considerable time, if ever,” Science reported.

Correction (July 30): The original version of this article misstated the size and mass of Kepler 452b. The mistake has been corrected. The Scientist regrets the error.