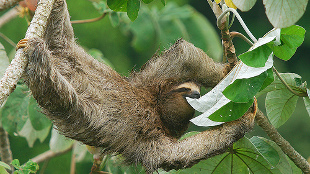 FLICKR, BILLTACULARThe three-toed sloth exhibits some pretty strange defecation behavior: once a week, the slow-moving mammals descend from the safety of their treetop perches to poop. But why these sloths would leave the comfort of the canopy and risk predation, among other things, has been somewhat of a mystery. Now, researchers at the University of Wisconsin-Madison propose that behavior helps to sustain an ecosystem within the animal’s fur that confers nutritional benefits. Their work was published today (January 22) in Proceedings of the Royal Society B.

The researchers found that three-toed sloths can harbor more phoretic moths than their two-toed counterparts because of greater concentrations of inorganic nitrogen and higher algal biomass in their fur. In turn, the researchers found that the moths increase algal growth, providing more sustenance for the algae-eating sloths. “By descending a tree to defecate, sloths transport moths to their oviposition sites in sloth...

But the University of São Paulo’s Adriano Chiarello, who was not involved in the work, is not entirely convinced that these mutualistic relationships are firm. Spending many hours observing these animals in the wild, “we never saw sloths behaving in a way that might suggest or indicate that they were somehow extracting algae or other nutrients from their fur,” Chiarello told National Georgraphic’s Not Exactly Rocket Science. However, he added: “Testing [this] hypothesis with sloths is not easy as they are difficult to capture and observe in their natural environment. . . . The authors are making their best with available data.”