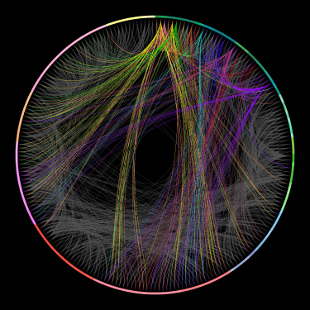 Circular wiring diagram of connections among 215 distinct regions throughout the mouse brainALLEN INSTITUTE FOR BRAIN SCIENCEWhen researchers from the Allen Institute for Brain Science in Seattle published in Nature an atlas of gene expression within the developing human brain yesterday (April 2), their institutional colleagues presented a connectome of the mouse brain in the same journal. Both resources, made freely available online by the Allen Institute investigators, add to a growing group of data that could help researchers better understand the brain and its functions.

In February, a team led by investigators from the University of Southern California published a connectome of the mouse cortex, which they also deposited online. This latest mouse brain connectome charts the entire brain at the cellular level. To produce “The Allen Mouse Brain Connectivity Atlas,” the researchers used GFP-expressing adeno-associated viral vectors to trace connections throughout the brain, which they...

David Van Essen from Washington University in St. Louis, one of the leaders of the human connectome project, told Reuters that this newest mouse connectome “provides the most detailed analysis of brain circuitry currently available for any mammalian brain.”

“This is a huge leap for modern neuroscience,” Martijn van den Heuvel from the University Medical Center in Utrecht, the Netherlands, told New Scientist. “It will be a reference data set for years of computational neuroscience to come.”