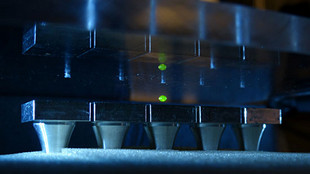 DIMOS POULIKAKOSResearchers have discovered how to move and mix substances using sound, according to a paper published in the Proceedings of the National Academy of Sciences yesterday (July 15). The technique, which works under normal atmospheric pressure, could help researchers manipulate reagents without contaminating them and perform reactions between hazardous materials more safely, Nature reported.

The researchers were able to levitate and transport items ranging from a droplet of water to a toothpick. They did so using pairs of sound-emitting platforms and reflector sheets. Sound leaves the sound-emitting platform, hits the reflector, and bounces back in the direction it came from. At certain points the sound waves meet in such a way that they cancel each other out, forming nodes. These nodes are where the levitated objects stay, and researchers can manipulate the objects by adjusting the positions of the nodes.

The researchers used levitation by sound waves to...

“This is a very versatile platform—almost anything you want to manipulate, you can,” Peter Christianen, a researcher at Radboud University in the Netherlands who studies magnetic levitation, told Nature.