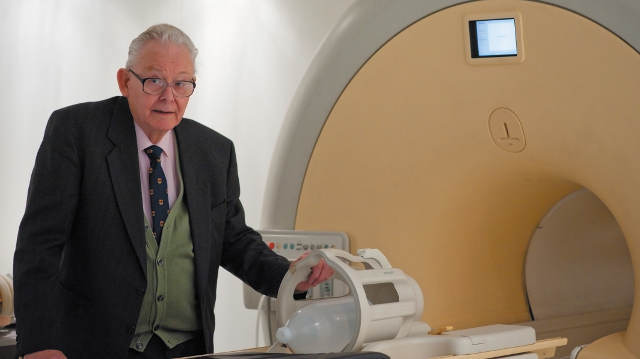 COURTESY OF THE UNIVERSITY OF NOTTINGHAMPeter Mansfield, the physicist formerly of the University of Nottingham whose research supported the development of magnetic resonance imaging (MRI), died last week (February 8). He was 83.

As a 15-year-old dropout, Mansfield was an unlikely Nobel laureate (and knight). He worked at England’s Rocket Propulsion Department while taking evening classes to get into university, and eventually attended Queen Mary College (now Queen Mary University London), where he learned about nuclear magnetic resonance (NMR), the physical phenomenon in which nuclei exposed to a magnetic field absorb and re-emit electromagnetic radiation. Used primarily for chemical analysis at the time, Mansfield “astounded the NMR research community by demonstrating that an NMR signal thought to be lost could be recovered and used,” Peter Morris, head of Sir Peter Mansfield Imaging Centre at the University of Nottingham, wrote in The Conversation.

He then went on to devise a way—echo-planar imaging—to assemble many more images in a lot less time, allowing him to image a beating heart. “EPI opened the door to see dynamic processes of a living body and functional MRI, which builds upon EPI, is today beginning to unlock the secrets of the human mind by revealing which parts of the brain are active during certain mental states,” Morris wrote in The Conversation. Mansfield was knighted in 1993 for his contributions to science and shared the 2003 Nobel Prize in Physiology or Medicine with the late American chemist Paul Lauterbur, in recognition of their contributions to MRI.

Mansfield is survived by his wife, two daughters, and four grandchildren.