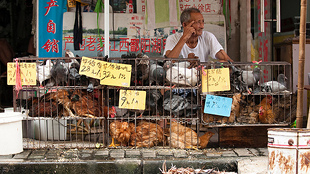 FLICKR, WHIZ-KAEarlier this year, the avian influenza virus H7N9 infected more than 130 people in China, causing more than 40 deaths before the outbreak fizzled out in May. Now, analyses of viral samples collected from poultry markets in April indicate that some Chinese birds may have also been infected with the related virus H7N7, according to research published yesterday (August 21) in Nature.

“H7 is out there in China and not just in the form of this H7N9,” Richard Webby, a flu researcher at St. Jude Children’s Research Hospital in Tennessee, told Nature News.

By examining historical avian flu virus sequences from geographically diverse areas, the researchers concluded that the H7N9 and H7N7 strains in China likely evolved as various H7 and N9 viruses reassorted in ducks before spreading to chickens.

While there have been no documented human infections related to H7N7 in China to date, the researchers were able to infect ferrets—often used as proxies for humans—with the virus. And in a 2003 flu outbreak, another version of the H7N7 virus ripped through livestock in the Netherlands and infected more than 80 humans, killing one man.

Study coauthor Yi Guan, a flu researcher at the University of Hong Kong, told The Guardian that the Chinese authorities should consider closing live poultry markets in major cities to reduce the risk of a renewed bird flu outbreak.

"The discovery of a novel H7N7 lineage that can infect ferrets reminds us that even if H7N9 does not return, there are risks lurking amongst the great diversity of avian influenza viruses," Peter Horby of the University of Oxford told The Guardian.