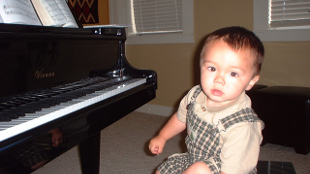 Music heals the souls, and it can also affect the brain, especially when experienced at a very young age, according to a study published in Developmental Science. One-year-old babies, not yet able to walk or talk, showed positive response to interactive music classes, smiling more, communicating better, and showing altered brain responses to music.

“Many past studies of musical training have focused on older children,” Laurel Trainor, study author and director of the McMaster Institute for Music and the Mind, said in a press release. “Our results suggest that the infant brain might be particularly plastic with regard to musical exposure.”

The study placed babies into one of two groups—those that participated in an interactive music-making classes where they and their parents learned to play percussion instruments and sing lullabies, nursery rhymes, and songs with actions, and those that spent that time playing with toys...

The two groups of babies also showed differences in non-musical skills. Those that had participated in the interactive classes showed better communication skills, like pointing at objects and waving goodbye, and smiled more. They were also easier to calm and seemed less distressed in unfamiliar situations.

“There are many ways that parents can connect with their babies,” study coordinator Andrea Unrau said in a press release. “The great thing about music is, everyone loves it and everyone can learn simple interactive musical games together.”