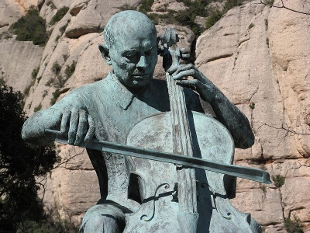 WIKIMEDIA, MDD4696Analyzing the genomes of 767 people, Irma Järvelä at the University of Helsinki, Finland, and her colleagues identified genes involved in the development of the inner ear may affect musical aptitude. Specifically, people with variations found near the genes GATA2—integral to the development of the inner ear and the inferior colliculus, the brain region that first receives signals from the hair cells of the inner ear—and PCDH15—which is involved in the conversion of air vibrations into electrical signals in the hair cells—were better able to differentiate similar pitches and durations of sound as well as recognize musical pattern. The results were published this week (March 11) in Molecular Psychiatry.

Of course, the study does not mean that musical ability is purely genetic, Järvelä told New Scientist. “The environment and culture where you live are also important in musical ability and development,” she said.

“Music isn’t rewarding for them, even though other kinds of rewards, like money, are,” lead author Josep Marco-Pallerés, a cognitive neuroscientist at the University of Barcelona, told The Verge. Those who are indifferent to music are said to have specific musical anhedonia. “It just doesn’t affect them,” said Marco-Pallerés, who is now using functional magnetic resonance imaging (fMRI) to examine differences in the participants’ brain activities as they listen to music. “Now that we know that there are people with specific musical anhedonia, we want to know the neural bases that might explain [it],” he said.

And in a third study, published yesterday (March 12) in Cerebral Cortex, researchers at McGill University showed that performing music helps people remember and recognize it thanks to the brain’s motor network. Psychology professor Caroline Palmer and her colleagues asked 20 skilled pianists to learn simple melodies, either by simply listening to them or by performing them. The musicians were then equipped with electroencephalography (EEG) electrodes to monitor the electrical activities of their brains while they listened to the same melodies, some of which had been tainted with wrong notes. For songs they had performed themselves, about 200 milliseconds after hearing incorrect notes, the pianists’ brains exhibited larger changes in brain waves and more increased motor activity, as compared with songs they had only heard.

“We found that pianists were better at recognizing pitch changes in melodies they had performed earlier,” first author Brian Mathias, a McGill graduate student, said in a press release. This suggests that the ability to recognize an incorrect note depends on the comparison of incoming auditory stimuli with stored motor information. “Our paper provides new evidence that motor memories play a role in improving listeners’ recognition of tones they have previously performed,” Palmer said in the release.