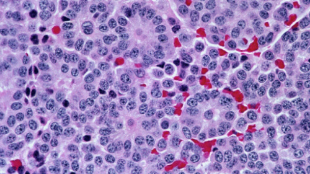 WIKIMEDIA, THE ARMED FORCES INSTITUTE OF PATHOLOGYCancers possess a combination of distinct mutational patterns, each of which is an “imprint left on the cancer genome by a mutational process,” according to a study published in Nature this week (August 14). “We have uncovered the archaeological traces within cancer genomes of the diverse mutational processes that lead to the development of most cancers,” Mike Stratton, senior author of the study and the director of the Wellcome Trust Sanger Institute in Cambridgeshire, U.K., said in a press release. Many of these patterns are linked to known mutagens, such as cigarette smoke and UV light. Other mutation combinations, however, don't have clear causes identified just yet, opening opportunities to dig up potentially novel mechanisms of cancer development.

A large, international team scoured the genomes of 7,042 cancers and analyzed nearly 5,000,000 mutations. The researchers found 21 mutation patterns that popped...

Every type of cancer the researchers studied had at least two mutational signatures. Liver, stomach, and uterine cancers each showed six mutation signatures.

Some of the mutation patterns had clear associations with known cancer causes, including environmental carcinogens. “Abnormalities in DNA maintenance may also be responsible for mutational signatures,” the authors wrote in their report. They attributed two mutation signatures to the APOBEC family of cytidine deaminases, which can be involved in the innate immune response to viral infections. “It may be that these mutational signatures represent collateral damage on the human genome from a response originally directed at retrotransposing DNA elements or exogenous viruses,” they wrote. “Confirmation of this hypothesis would establish an important new mechanism for initiation of human carcinogenesis.”