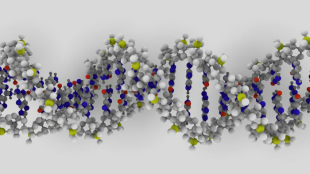 WIKIMEDIA, YNSEApolipoprotein C3 (APOC3) increases triglyceride levels in the blood, which in turn are tied to a higher chance of cardiovascular disease. Two studies published in the New England Journal of Medicine this week (June 18) report that people with a genetic mutation in the gene for APOC3 have not only lower triglyceride concentrations, but a reduced risk of heart disease as well.

“In medical school we were told to ignore triglycerides and focus on [high-density lipoprotein],” Ethan Weiss, an associate professor at the University of California, San Francisco, School of Medicine, told Forbes. “It turns out that we probably had it backwards, and that we should be paying attention to triglycerides and ignoring HDL.”

In one study, an analysis of more than 110,000 people found that 498 participants who had a loss-of-function mutation in the APOC3 gene had a 40 percent drop in their risk of...

Similarly, in the other study, carriers had a 44 percent reduction in circulating triglycerides and a drop in their risks for vascular disease and heart disease. “These findings are of potential clinical importance,” the authors wrote in their report, “because they suggest that APOC3 is a relevant drug target for reducing residual cardiovascular risk.”

The mechanism behind the reductions in heart disease is not entirely clear. Robert Hegele, a heart disease expert at Western University in London, Ontario, who was not involved in the new studies, told The New York Times: “Do [triglycerides] just keep bad company or are they independently doing something to risk?” And it remains to be seen whether triglyceride-lowering therapies could effect the risk reductions associated with APOC3 mutations.