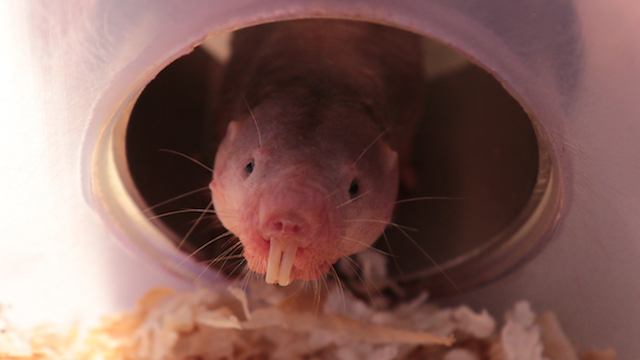 Naked mole rats (Heterocephalus glaber) are tough rodents that have high tolerance for certain types of pain and, until recently, appeared to also be cancer-free. In a study published last week (April 21) in Science, researchers reported yet another remarkable trait: these creatures can survive up to 18 minutes without oxygen, by switching from glucose- to fructose-based metabolism.

“The naked mole rat has simply rearranged some basic building-blocks of metabolism to make it super-tolerant to low oxygen conditions,” coauthor Thomas Park at the University of Illinois at Chicago, told The Guardian.

When Park and colleagues placed naked mole rats in a chamber containing 0 percent oxygen, the animals lost consciousness—but even after 18 minutes, the rodents were able to recover completely when reintroduced to oxygen. Mice, on the other hand, died around 45 seconds after scientists placed them in the 0 percent oxygen...

“This is an exceptional feat for a mammal,” Grant McClelland, a comparative exercise physiologist at McMaster University in Canada, who was not involved in the work, told Science.

When the researchers analyzed the blood of the oxygen-deprived naked mole rats, they found high levels of two sugars, fructose and sucrose (a compound of glucose and fructose typically found in plants). They also discovered high levels of GLUT5, a fructose transporter, throughout the animals’ bodies. “Together this allows the naked mole rat to use fructose as fuel instead of glucose when there is no oxygen,” coauthor Gary Lewin of the Max Delbrück Center (MDC) for Molecular Medicine in Germany told Science.

The team is interested in investigating whether this metabolic switch can happen in human cells as well. With further investigation, scientists might apply this knowledge to help humans during a stroke or heart attack, when vital organs are deprived of oxygen, as people also have the ability to metabolize fructose without oxygen, Park told The New York Times. “In theory we could bring that online when need be.”