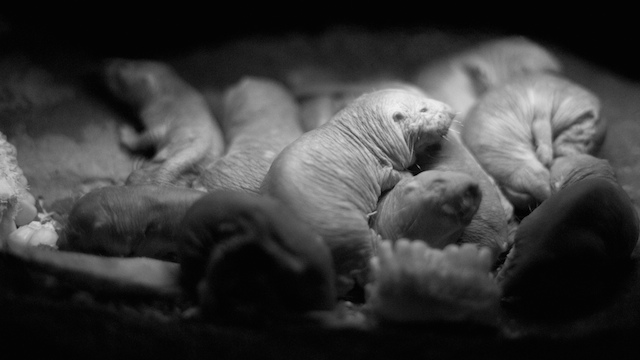 Naked mole rats (Heterocephalus glaber) are sociable, long-lived rodents that have evolved an unusually low sensitivity to some types of pain. In a study published today (October 11) in Cell Reports, researchers have worked out the molecular basis for one type of the rodent’s pain tolerance. A minor amino-acid substitution renders a pain receptor in naked mole rats less responsive, reducing the sensitivity of inflamed tissue to heat.

“We think evolution has selected for this tweak just subtly enough so that the pain signaling becomes non-functional, but not strong enough that it becomes a danger for the animal,” study coauthor Gary Lewin of the Max-Delbruck Center for Molecular Medicine in Berlin, Germany, said in a press release.

In most mammals, a burn causes the affected tissue to be extra sensitive until the body has time to repair the damage, a reaction called thermal...

“Even though the naked mole rat’s version of the TrkA receptor is almost identical to that of a mouse or a rat, it has a very significant effect on the animal’s ability to feel pain,” Lewin said in the press release.

The adaptive purpose of blunting thermal hyperalgesia is not clear, but could have something to do with the energetic demands of living underground in the desert. “They have to do a lot of work to get their food,” Lewin said in the press release. “They have the lowest metabolic rate of any mammal. Evolution has shut down everything that is not absolutely necessary—including extra nerve receptors.”