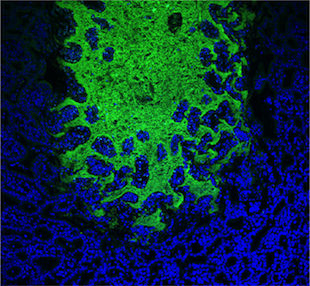 Gut bacteria in miceFLICKR, NIAIDThe White House today (May 13) announced the launch of a National Microbiome Initiative to support research on the microorganisms that live in or on the human body, plants, and other ecosystems, to provide a better understanding of their role in human and environmental health. The project’s goals are to support fundamental research, develop new technologies, and engage more people in this field, according to the Office of Science and Technology Policy (OSTP).

“This is a great day of celebration for everybody in this field,” J. Craig Venter, founder and CEO of the J. Craig Venter Institute, said during a press briefing held at the White House.

Heeding a call from scientists last year for a moonshot effort akin to the BRAIN Initiative, the federal government plans to invest $121 million in the new microbiome initiative for fiscal years 2016 and 2017....

In response to a call to action issued by the White House in January, dozens of other nonprofits, companies, and research institutions are investing an additional $400 million in support of the new initiative. The Bill and Melinda Gates Foundation will provide $100 million over the next four years to support studies on childhood malnutrition and crop-related diseases. The Gordon and Betty Moore Foundation will invest $31 million over the same period to support ocean microbiome research. And the diabetes foundation JDRF will invest $10 million over five years to support research related to type 1 diabetes.

“This is really only the beginning,” OSTP Director John Holdren, assistant to the President for science and technology, said during the briefing. “This initiative aims to bring together many of the key ingredients to accelerate progress in this field.”

The initiative builds on existing microbiome research efforts, which got a boost in 2007 with the launch of the NIH’s Human Microbiome Project. Federal investments in microbiome research tripled from 2012 to 2014, totaling more than $922 million during that period, according to a 2015 report from the National Science and Technology Council.

“Everyone’s efforts will go much further by having this efficient process,” Miyoung Chun, executive vice president of science programs at the Kavli Foundation, told STAT News. “It’s an exciting new era of the microbiome field.”