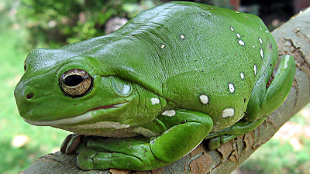 Litoria caeruleaWIKIMEDIA, LIQUIDGHOULWhen raised with the tadpoles of a native Australian green tree frog (Litoria caerulea), invasive cane toad (Rhinella marina) tadpoles grew more slowly and were less likely to survive, according to research published last month (February 21) in Austral Ecology. The findings raise the possibility that the native frogs could be introduced into suburban areas to control the population of cane toads, considered a feral pest.

Native to South America, cane toads were introduced down under to control sugar pests in the 1930s. They have since become one of the world’s most successful invasive species—largely because they produce large clutches of eggs, can migrate relatively long distances, and boast poisonous defenses. So far, no control efforts have been able to keep the toads in check, and they continue to wreak havoc on Australia’s native fauna.

But researchers at the University of...

“If other larger tadpoles are present, the cane toad tadpoles don't get as much food—they can't compete successfully—and so they grow and develop slowly [and] often die as larvae,” lead author Richard Shine told BBC News. And even when they do metamorphose, the toads are tiny and thus very unlikely to survive, he added.

“So, if we can encourage native frog populations back into suburban areas where they once occurred, they will be able to reduce survival and recruitment of cane toads from those same ponds,” said Shine. “I think that it would be terrific to have giant green frogs sitting in people's mailboxes again!”