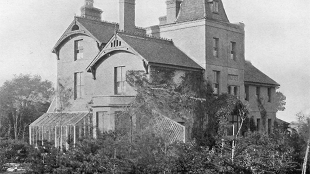 The Dell as it looked when Alfred Russel Wallace and his family lived thereAn English countryside house built for the great Victorian naturalist Alfred Russel Wallace is for sale, reported a Nature blog. Although long in the shadow of Charles Darwin, Wallace has recently received recognition for coming up with the theory of evolution by natural selection independently of Darwin.

Wallace returned to the United Kingdom in 1862 after years of specimen-collecting adventures in the tropics, and by 1870 he was scouting for somewhere to build a home, according to the Wallace Fund. He eventually decided on an abandoned chalk pit in Grays, Essex, roughly 20 miles from London on the banks of the River Thames, and commissioned an architect to build a house of molded concrete.

Wallace and his family lived in the house, called “The Dell,” from 1872 until 1876, during which time Wallace wrote...

The house, which features a plaque bearing Wallace’s name, will go on the market with a guide price of £1.5 million ($2.2 million).