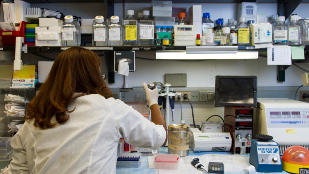 IMAGE, NCI - DANIEL SONECommencing a study that will enroll 1,000 cancer patients with specific tumor mutations, researchers at the National Cancer Institute (NCI) will be matching participants to more than 20 different drugs, each designed to target specific genetic changes. The NCI team announced the launch of its Molecular Analysis for Therapy Choice (NCI-MATCH) trial yesterday (June 1) at the annual American Society of Clinical Oncology (ASCO) meeting in Chicago. “This is the largest and most rigorous precision oncology trial that has ever been attempted,” James Doroshow, deputy director of the NCI, said at the ASCO meeting.

Precision medicine, sometimes referred to as personalized medicine, is an increasingly prevalent approach, championed by President Barack Obama in his 2015 State of the Union address. Researchers will begin screening and enrolling patients in the Phase 2 NCI-MATCH trial at 2,400 US clinical sites next month. Doroshow said at the...

Cancer researchers are hopeful that the NCI-MATCH trial and ASCO’s Targeted Agent and Profiling Utilization Registry (TAPUR) study, which was also announced Monday, will advance precision medicine and increase scientists’ understanding of basic cancer biology. “That’s the promise of precision medicine,” José Baselga of New York City’s Memorial Sloan Kettering Cancer Center told The Washington Post. “You [now] have the capability to identify what’s driving the particular tumor and then to devise methodologies that result in a better understanding of the disease and the development of better therapies. That’s where the optimism resides.”

Ten pharmaceutical companies are providing more than 20 drugs—some that are currently on the market and others that are still in development—to be used in the NCI-MATCH trial. These include Pfizer’s crizotinib (Xalkori), which functions as a protein kinase inhibitor, and GSK’s trametinib (Mekinist), a mitogen-activated protein kinase kinase (MEK) inhibitor.

The smaller TAPUR trial, which will begin enrolling patients by the end of the year, is designed to test already approved drugs targeted to specific mutations, but in tumors located in tissues other than those in the compounds’ original indications.

“These are trials that are an acknowledgment that we are in the midst of the era of precision medicine,” Sandra Horning, chief medical officer and head of global product development at Roche—which is providing drugs for the trials—told The Wall Street Journal. “It will be a great way to learn where targeted therapies might have utility that we don’t understand.”