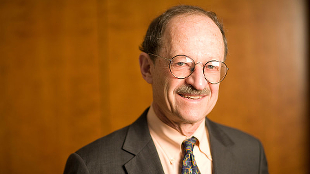 With $10 million redirected from other projects at the NCI’s National Laboratory for Cancer Research (NLCR) in Frederick, Maryland, the RAS project—which will be carried out at a dedicated lab on the same site, but will also work with outside researchers—has a clear goal: “Finally after 30 years of knowing how important RAS is in cancer, [the aim is] to actually produce some outcomes that are helpful to patients,” said NCI Director Harold Varmus at a joint meeting of the National Cancer Advisory Board and the NCI’s Board of Scientific Advisors.

A family of proteins found in all human cells, RAS proteins...

To overcome that obstacle, the NCI’s RAS project will push forward with five different sub-projects, many of them focused on figuring out the structure of mutant KRAS, the most common form RAS in cancer. Much of the work will be carried out at the NLCR, and scientists there will provide materials to and work with outside researchers. Indeed, Frank McCormick, the outgoing director of the Helen Diller Family Comprehensive Cancer Center at the University of California, San Francisco, who will help lead the RAS project, told ScienceInsider that a big part of the plan is “the idea of building a RAS community.”