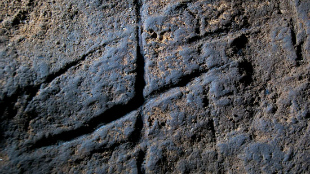 IMAGE COURTESY OF CLIVE FINLAYSONGorham’s Cave in Gibraltar is home to what’s being called the “first known example of an abstract pattern.” Researchers reported in PNAS this week (September 2) their discovery of a cluster of hashes and lines thought to have been engraved by Neanderthals about 39,000 years ago.

“Originally, we could not quite believe what we had found and had to convince ourselves it was real,” Gibraltar Museum director Clive Finlayson, who led the study, told National Geographic. “Is it art? Is it a doodle? I don’t know, but it is clearly an abstract design.”

The criss-crossed lines occupy a small patch of cave—just 300 square centimeters (118 inches). The nature of the deep cuts appear deliberate and careful, rather than unintentional. The excavation suggests Neanderthals might have had the capacity for symbolic thought.

“We will never know the meaning the design held for the maker...

Clive Gamble, an archaeologist at the University of Southampton in the U.K.  cautioned that it’s possible the markings could have come from modern humans. “What is critical, however, is the dating,” Gamble told the AP. “While I want Neanderthals to be painting, carving and engraving, I’m reserving judgment.”