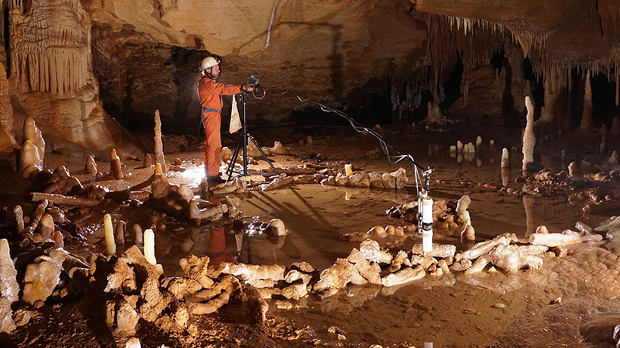 ETIENNE FABRE - SSACNeanderthals had a much richer cultural life than their brutish troglodytic reputation might suggest, according to a study published last week (May 25) in Nature. Scientists studying southwest France’s Bruniquel Cave, which has previously yielded evidence of hominin occupation, have suggested that large circles of stalagmites broken off from the cave floor were arranged by Neanderthals more than 174,000 years ago.

“This discovery provides clear evidence that Neanderthals had fully human capabilities in the planning and the construction of ‘stone’ structures, and that some of them penetrated deep into caves, where artificial lighting would have been essential,” Chris Stringer, a paleoanthropologist at the Natural History Museum in London who was not involved in the study, told National Geographic.

“The big question is why they made it,” Jean-Jacques Hublin, a palaeoanthropologist at the Max Planck Institute for Evolutionary Anthropology in Leipzig, Germany, who also did...

University of Bordeaux archaeologist Jaque Jaubert and his coauthors recently revisited the structures, which were first discovered in the early 1990s. Armed with enhanced methods of dating the materials in the cave, Jaubert and his team analyzed the stalagmite circles—some as deep as 336 meters beyond the cave entrance and as large as 7 meters in diameter—and found that they were constructed between 174,400 and 178,600 years ago. The feat required complex planning and coordination, the authors suggest, because the structures are 50 centimeters high in spots and are made from hundreds of stalagmites weighing several tons in total. “That must take time,” Jauber told New Scientist.

In addition to the complex logistics involved in constructing the circles, the Neanderthal builders likely toiled by torchlight. This indicates “that humans from this period had already mastered the underground environment, which can be considered a major step in human modernity,” the authors wrote in the paper.