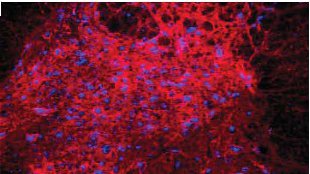 A peripheral nerve graft and treatment with an enzyme blocker restored breathing in partially paralyzed rats. The finding, published today (July 13) in Nature, suggests that a similar technique could one day be used to treat quadriplegics, who usually need artificial respirators to breathe.

“This is the first study that has shown that after a cervical spinal cord injury you can improve breathing function from this paralyzed muscle by combining these two therapies,” said Wayne State Medical Center neuroscientist Harry Goshgarian, who was not involved in the study. The results also suggest that mixing the pair with additional treatments, such as electrical stimulation or other drugs, might bring even further improvement, he said.

For over a century, researchers have tried grafting long segments of nerve fibers around the spinal cord to...

Using nerves extracted from other parts of the body is promising because the grafts contain supporting cells that guide and feed new nerves as they grow. But while the nerve cells grow just fine inside the graft, they are blocked from reaching the motor neurons by scar tissue made up of slimy proteoglycan molecules, proteins with sugary tails.  “Nerve cells can get in but they can’t get out,” Silver said.

Several years ago, researchers found that an enzyme called chondroitinase ABC snipped the sugary tail from proteoglycans, preventing them from forming the matrix of scar tissue. This led Silver to wonder if the enzyme could enable the grafted nerve cells to escape the graft’s boundaries and infiltrate the motor neurons to restore muscle function. To answer this question, Silver and his colleagues sliced through a high section of the spinal cord in rats, paralyzing half of the body and diaphragm (the rats could still breathe from the functional half of the muscle). The researchers then poked one end of the nerve graft into the brain stem region that regulates breathing, and the other end to a spot 1 centimeter down the spinal cord where motor nerves direct the diaphragm’s motion. Finally, they applied chondroitinase ABC to the diaphragm’s motor neuron pool in an attempt to prevent proteoglycans from sabotaging the graft.

After several weeks, hundreds of nerves traveled from the graft to the motor neuron pool inside the spinal cord, and the paralyzed side of the diaphragm slowly began to move in a coordinated rhythm.

“The return of function occurs around 10 weeks and then really blooms around 12 weeks,” Silver said.“It’s really remarkable. Once the activity starts to return it’s really robust.”

The grafts contained a hodgepodge of different nerve fibers, only a tenth of which are responsible for breathing. Yet only the fibers that direct breathing formed connections in the spinal cord. The authors speculate that the interneurons between the breathing center in the brain stem and the diaphragm’s motor neurons were key orchestrators of this process.

The results give hope that a similar technique could eventually be used to restore breathing in quadriplegics. Because doctors use nerve grafts already, only chondroitinase ABC would need to be studied in humans, said Oswald Steward, the director of the Reeve-Irvine Research Center, who was not involved in the study. “I think it is something that could move forward to a clinical trial pretty quickly.”