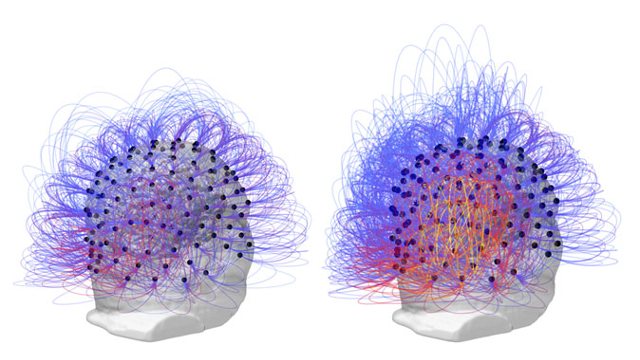 Information-sharing in the patient's brain before (left) and after vagus nerve stimulation, as measured using scalp electroencephalography. Yellow and orange indicate an increase in connectivity. CURRENT BIOLOGYThe delivery of gentle pulses of electricity to the vagus nerve of a man who’d spent 15 years in a persistent vegetative state appears to have awakened “minimal consciousness” in him, researchers report today (September 25) in Current Biology. The man remains paralyzed and unable to speak, and experts caution against drawing conclusions about the success of the intervention based on a case study of a single patient.

The 35-year-old patient had been in a vegetative state, asleep most of the time or unresponsive to his surroundings, since he was injured in a car accident 15 years before, reports Ars Technica. But after researchers based at the French National Center for Scientific Research implanted a device in his chest to deliver...

The results were striking, given that people who have been in a persistent vegetative state for a year or more are considered to have a small chance of ever awakening. “I am emphatically in favor of this line of research,” neurologist Uzma Samadani of the University of Minnesota tells Ars Technica. But Harvard Medical School neurologist Andrew Cole tells Science that other factors, such as the surgery itself or frequent visits from researchers, might also have played a role in changing the patient’s state. “I’m not saying their claim is untrue,” he says. “I’m just saying it’s hard to interpret based on the results as presented.”

“Many of these patients may and will have been neglected, and passive euthanasia may happen often in a vegetative state,” Niels Birbaumer of the University of Tübingen in Germany who was not involved in the study, tells The Guardian. “This paper is a warning to all those believing that this state is hopeless after a year.”