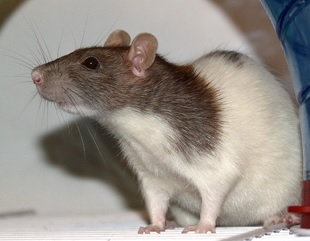 WIKIMEDIA, PEMELETHumans and many other animals are generally risk-averse, meaning they will usually choose stable, certain rewards over risky ones, even if the average payoff from both options is the same. Now, researchers at Stanford University have identified—and manipulated—a specific signal in the brains of rats that determines risky behavior just before the animals make a decision. The findings were published yesterday (March 23) in Nature.

“It turns out you can explain a large part of whether rats were risky or not by this particular signal at this particular time,” study coauthor Karl Deisseroth of Stanford told The New York Times. “We saw it happen, and then we were able to provide that signal, and then see that we could drive the behavior causally.”

Previous research had suggested that an area of the forebrain called the nucleus accumbens plays an important role in decision-making. Part of the...

To investigate the role of these neurons in risky decision-making, the researchers implanted an optical fiber into the nucleus accumbens of 17 rats. They then provided the rats with two levers: one that always prompted the release of a medium-size sugar water reward, the other resulting in a usually much smaller—but sometimes much larger—reward.

As expected, the researchers found that most rats were risk-averse, preferring certain, medium-size rewards most of the time. They also observed elevated activity of dopamine receptor–containing neurons in these rats’ nucleus accumbens in the moments before the animals pulled a lever. Risk-prone rats, meanwhile, showed much lower activity in these cells.

Using optogenetics, the researchers were able to induce risk-averse behavior by stimulating dopamine receptor–containing neurons artificially, even in otherwise risk-prone rats. Administering a drug that stimulates dopamine receptors, however, had the opposite effect.

“We are now that much closer to solving that most fascinating of questions: How does the brain use patterns of neural activity to make decisions?” Catharine Winstanley of the University of British Columbia who was not involved in the work told The Atlantic. “Such information is revolutionary for neuroscience, but will also help us to understand what has gone wrong in disorders of maladaptive decision-making, such as gambling and substance-use disorder.”