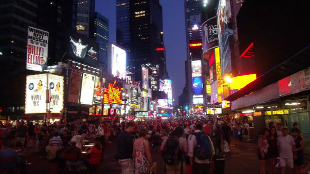 WIKIMEDIA, IBAGLIAt the close of each day—from 11:57 to midnight—through the end of this month, electronic billboards in New York City’s Times Square will project Brain City, a film that takes viewers deep into the microscopic network of the brain.

“I wanted to make something that appealed directly to awe, wonder and mystery, without any other messages about what it means,” the film’s creator, Noah Hutton, told New Scientist. “These are the feelings that got me interested in the brain to begin with, provoked first by a purely aesthetic experience of seeing some of the early hand-drawn sketches of neurons I was also interested in exploring analogies between cities and brains.”

The stunning imagery was derived from a number of sources, including the Human Brain Project, CLARITY, Neurodome, and a crowdsourced brain mapping game called Eyewire.

Scientific American’s PsiVid summed it up simply: “This...

Editor’s Note (December 1): This post has been updated to include Neurodome as one of the partners on the Brain City project.