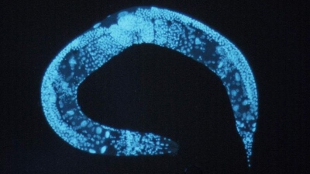 C. elegansWIKIMEDIA, NATIONAL HUMAN GENOME RESEARCH INSTITUTEResearchers from the United States and Vienna have simultaneously imaged the activity of all 302 neurons of C. elegans, revealing how quickly nervous impulses traverse the worm. The team then used the technique, which involves engineering neurons to light up when firing, to image the brains of transparent zebrafish larvae. While scientists have long mapped the neuronal connections of various organisms—the entire connectome of C. elegans was first published in 1986, for example—the new results, published yesterday (May 18) in Nature Methods, represent the first time that the activity of an organism’s entire nervous system has been viewed in real time.

“The connectome and activity are entirely complementary,” Misha Ahrens, a neurobiologist at the Howard Hughes Medical Institute's Janelia Farm Research Campus in Ashburn, Virginia, told Nature News. “You’re not going to understand the nervous system by observing one...

“What’s very impressive about it is that it is such an elegantly simple implementation,” Aravinthan Samuel, a professor of physics at Harvard University who was not part of the research team, said in a press release. “I could imagine many labs adopting this.”

To achieve this imaging success, neuroscientist Alipasha Vaziri of the University of Vienna and his colleagues turned to light-field deconvolution microscopy, which yields 3–D images based on images from a set of tiny lenses. With up to 50 images per second, the researchers captured real-time neural activity of the brain, ventral cord, and tail as each worm performed natural behaviors such as crawling. Turning to zebrafish larvae, the researchers were able to visualize the activity of about 5,000 neurons in the brain as the fish responded to chemical odors.

“Looking at the activity of just one neuron in the brain doesn’t tell you how that information is being computed; for that, you need to know what upstream neurons are doing. And to understand what the activity of a given neuron means, you have to be able to see what downstream neurons are doing,” coauthor Ed Boyden, an associate professor of biological engineering and brain and cognitive sciences at MIT, said the release. “In short, if you want to understand how information is being integrated from sensation all the way to action, you have to see the entire brain.”

The challenge now, Boyden added, is to improve the imaging speed and resolution to be able to observer larger swaths of neurons in complex organisms. In the long run, the researchers hope that they might even be able to visualize activity across individual neurons, tracking activity in the neuronal bodies, dendrites, and axons. (For more on other recent advances in neuroimaging, see “Brains in Action.”)