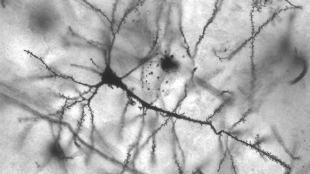 WIKIMEDIA, METHOXY ROXYNeural regeneration has long been eyed as a possible treatment for spinal cord injury. Unfortunately, most studies have shown that unless new cells are grafted within a few weeks of injury, no new neurons are able to grow. This is in part because astrocytes and other neural support cells form a scar, of sorts, that physically blocks neuronal growth. But Ken Kadoya and colleagues at the University of California, San Diego, have demonstrated that neurons can and do grow in injured rat spinal cords months after injury, according to research presented at the Society for Neuroscience (SfN) meeting being held in Washington, DC, this week.

The researchers grafted neural progenitor cells from fetal rats into lesions in the adult rat spinal cords either two weeks or six months after injury. In both groups, the results looked nearly identical: the lesions filled up with new neurons, and those...

Moreover, the researchers found that the astrocyte-generated scar tissue around the lesion site had disappeared after neural regrowth. “It’s as if the tissue rejuvenates,” said neuroscientist Lars Olson of the Karolinska Institute in Sweden who was not involved in the work. “That is amazing.”