Brain region-specific organoids X. QIAN ET AL., CELL., 165:1238-54, 2016To better recapitulate the intricacies of the human brain, scientists are growing up organoids that model discrete brain structures. In a presentation at the Society for Neuroscience meeting taking place this week (November 11-15) in Washington, D.C., neuroscientist Guo-li Ming of the University of Pennsylvania says her team’s forebrain organoids, which mimic certain complex features of the developing human brain, can help researchers understand the mechanisms behind Zika’s debilitating effects.

It’s difficult to control the growth of whole brain organoids, says Ming in an interview with The Scientist, and researchers end up with structures that are highly variable and contain a randomly distributed mish-mash of brain regions. Instead, Ming and her team were able to grow forebrains using custom-made bioreactors and a cocktail of specialized growth signals.

When the team exposed these more-sophisticated structures to Zika, the virus preferred to infect neural stem cells over mature neurons, confirming earlier results.

Ming and her team also selectively infected their forebrain organoids with ZIKA-NS2A, one of Zika’s seven non-structural proteins, demonstrating that this specific protein alone can disrupt the growth of radial glial cells.

The researchers cultivated these forebrain-specific organoids using 3-D printed, miniaturized bioreactors, designed with the help of three high school interns. The bioreactors consisted of small containers filled with culture media that were motorized to spin, preventing the growing cells from sticking to the walls of the container and thereby increasing the diffusion of nutrients and oxygen. 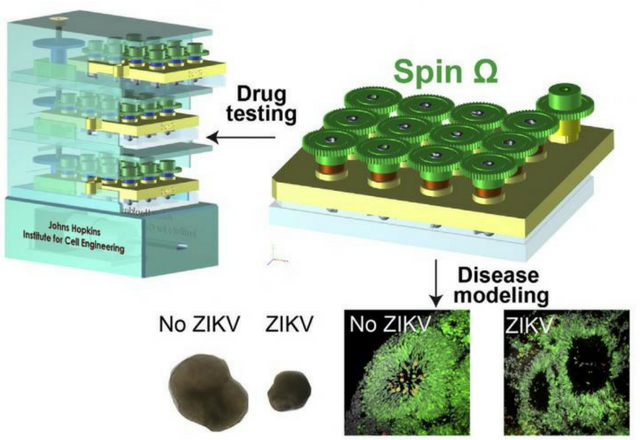 Custom-made bioreactors (dubbed “Spin Omega”) can be used for drug testing and modeling the effects of diseases that impact brain development, such as Zika virus. X. QIAN ET AL., CELL., 165:1238-54, 2016 Spinning bioreactors are a “very exciting development in the field,” says Ming. “By keeping the cells growing in suspension, [bioreactors] mimic the microenvironment in the uterus.”

An added bonus is that the team’s custom contraptions require less culture media, which is expensive; the larger containers that come with typical bioreactors require it in hefty amounts.

Ming and her team have also designed protocols for growing other regions of the brain, including the hypothalamus and mid-brain structures.