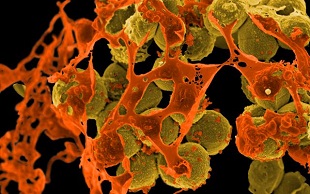 FLICKR, NIH/NIAIDThe number of antibiotics being developed by pharmaceutical companies has dwindled in recent decades, but two new drugs should be available within a matter of months. The first, Dalvance—an intravenous drug that can treat skin and soft tissue infections—was approved by the FDA last month (May 23). The second, oritavancin, was the subject of a clinical trial study led by G. Ralph Corey of Duke University  that was published yesterday (June 5) in The New England Journal of Medicine.

“This is a bit of a light at the end of a dismal tunnel in the development of new antibiotics,” Vanderbilt University’s William Schaffner , who was not involved in the new study, told The New York Times.

Both drugs are effective against methicillin-resistant Staphylococcus aureus (MRSA) and other skin infections. Dalvance is an injectable drug and is the first drug to be approved via FDA’s new Generating...

Oritavancin is a single-dose antibiotic that may be approved as early as August, also on a fast-track. Its one-time use could cut down on the number of people who do not complete their courses of antibiotic treatment. “These patients could potentially just get an antibiotic and not be admitted to the hospital at all,” Henry Chambers of the University of California, San Francisco, told The New York Times. “The big question is, how much money do the drug companies want in order to be able to do that?” Chambers, who wasn’t involved in the development of Oritavancin, added. “It won’t be chump change.”