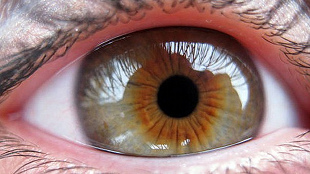 People with vision problems could one day walk around with devices on their heads that convert the world around them into a holograph, stimulating damaged retinal cells to transmit a picture of the scene. A paper, published earlier this month (February 19) in Nature Communications, demonstrated that holographs could effectively stimulate retinal ganglion cells in mice with outer retinal degeneration, and suggests that the technique could be effective for people with degenerative diseases of the retina, such as retinitis pigmentosa.

The scientists relied on a technique called optogenetics, which usually involves inserting light-sensitive algal or bacterial proteins into the eyes in order to sensitize the damaged cells to light.  In this case, they used mice that had been bred to express the green algal protein channelrhodopsin II.

The light we ordinarily use to see can’t activate the damaged cells very effectively, however, so scientists have been...

Using holography to stimulate the retinal cells, Shoham and coauthors say, has the potential to give a much higher-resolution image by directing very intense beams to specific cells rapidly and sometimes simultaneously. “Holography, what we’re using, has the advantage of being relatively precise and intense,” Shoham said in a press release. “And you need those two things to see.”