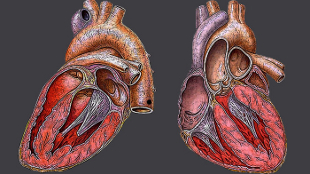 WIKIMEDIA, HEIKENWALDER HUGOScientists have converted normal heart muscle cells into pacemaker cells that control heartbeat by inserting a single gene into the heart of a guinea pig. The findings, published this week (December 17) in Nature Biotechnology, hint at the possibility of a biological alternative to artificial pacemakers for humans with failing hearts.

A human heart is made up of around 10 billion cells, but only the 10,000 or so cells in are responsible for firing the electrical pulses that control its beat. When old age or disease result in the failure of these pacemaker cells, the downstream muscle cells that create contractions lapse into inactivity. At the moment, the typical treatment is a battery-powered pacemaker implanted into the heart.

But researchers at Cedars-Sinai Heart Institute in Los Angeles, California, have created a new kind of pacemaker. Using a viral vector, they inserted into the heart of a...

After a few days, the modified cells “generated electrical impulses spontaneously and were indistinguishable from native pacemaker cells,” Hee Cheol Cho, lead author of the study, said in a press release. “Although we and others have created primitive biological pacemakers before, this study is the first to show that a single gene can direct the conversion of heart muscle cells to genuine pacemaker cells.”

Though it will be years before the approach can even be tested in humans, the therapy could theoretically be administered by injecting Tbx18 into a patient’s heart or by transplanting pacemaker cells created in the lab.