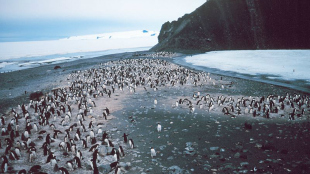 WIKIMEDIA, MICHAEL VAN WOERT, NOAA NESDIS, ORAReserachers have long suspected that bird flu was circulating among penguins in Antarctica. Blood samples from the birds contained antibodies to influenza, but scientists had not pinned down a virus until recently. A study published today (May 6) in mBio describes unusual H11N2 strains infecting Adélie penguins.

“We found that this virus was unlike anything else detected in the world,” Aeron Hurt, a senior research scientist at the WHO [World Health Organization] Collaborating Centre for Reference and Research on Influenza in Melbourne, Australia, said in a press release. “When we drew phylogenetic trees to show the evolutionary relationships of the virus, all of the genes were highly distinct from contemporary [avian influenza viruses] circulating in other continents in either the Northern or Southern Hemisphere.”

Hurt’s team collected blood samples and throat and cloaca swabs from a few hundred penguins, eight of which...

The team noted that infected birds didn’t appear sick. And when the researchers exposed the virus to ferrets, they didn’t catch the flu, indicating that it’s not transmissible to the mammals.