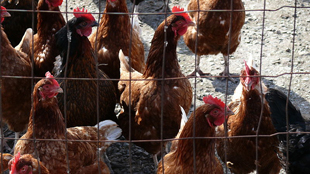 WIKIMEDIA, GAVIN SCHAEFERBefore December, the H10N8 strain of avian influenza A had only been detected in birds. On December 17, Chinese authorities notified the World Health Organization (WHO) that a 73-year-old woman from Jiangxi Province in China had tested positive for H10N8 influenza. The patient, who was immunocompromised, was hospitalized with fever and pneumonia on November 30 and died after multiple organ failure on December 6. Researchers in China who identified H10N8 in the initial case presented their findings today (February 4) in The Lancet.

The authors reported that the patient visited a poultry market four days before becoming ill. But identical strains of H10N8 were not identified at the poultry market, so the source of the virus could not be confirmed. They also reported that caregivers and family members of the patient did not test positive for the virus. The researchers sequenced virus isolated from tracheal aspirate...

“A genetic analysis of the H10N8 virus shows a virus that is distinct from previously reported H10N8 viruses, having evolved some genetic characteristics that may allow it to replicate efficiently in humans,” coauthor Yuelong Shu of the Chinese Center for Disease Control and Prevention in Beijing said in a statement. “Notably, H9N2 virus provided the internal genes not only for the H10N8 virus, but also for H7N9 and H5N1 viruses.”

On January 30, the WHO reported a second case of H10N8 in a 55-year-old woman, also from the Jiangxi Province, who is currently in stable condition. Despite two reported cases of H10N8, most experts are more concerned about other influenza strains—H7N9 and H5N1.

“I think this is an outlier,” Leo Poon of the University of Hong Kong, who did not participate in the identification of the initial case of H10N8, told CNN. The H7N9 influenza strain is “far more serious.”