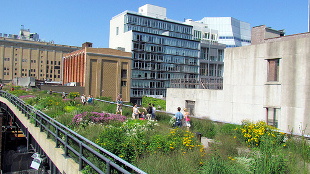 The High Line, New York CityFLICKR, DAVID BERKOWITZLast summer, while working in an elevated park on the west side of Manhattan, an exterminator spotted what turned out to be a species of cockroach that is common in Asia but had never been seen in the U.S. before. Using DNA barcoding, Rutgers University’s Jessica Ware and Dominic Evangelista confirmed in the Journal of Economic Entomology that the unusual specimen the worker had found was Periplaneta japonica, a cockroach known for its ability to survive outdoors in freezing temperatures.

P. japonica—which, Ware said in a statement “do very well as hitchhikers”—may have entered the country via imported plants, the researchers suggested. It’s not yet clear whether the roach will, as they say, make it in New York, though.

“There has been some confirmation that it does very well in cold climates, so it is very conceivable that it...

Of course, if they do succeed, it could mean bad news for the city’s resident roaches, Evangelista told the Associated Press. “Because this species is very similar to cockroach species that already exist in the urban environment, they likely will compete with each other for space and for food.”