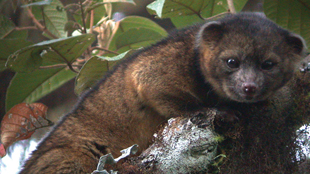 A curator’s curiosity jumpstarted a 10-year journey that led from a collection of decades-old remains to the cloud forests of Colombia and Ecuador. Along the way, a new species of carnivorous mammal—the first identified in the Western Hemisphere since the Colombian weasel—was discovered. Named the olinguito, or Bassaricyon neblina, the new mammal had been mistaken for its close relative, the olingo, by zookeepers and museum curators for nearly a century. The finding was published Thursday (August 15) in ZooKeys.

Kristofer Helgen, the curator of mammals at the Smithsonian Institution National Museum of Natural History, found the collection of skin, skulls, and bones tucked away in a drawer at Chicago’s Field Museum. “It stopped me in my tracks,” he told BBC News. “The skins were a rich red color and when I looked at the skulls I didn't recognize...

The remains had been labeled as an olingo, a member of the raccoon family. However, they appeared to represent an animal different from olingos on several fronts: it was smaller and furrier, plus had different teeth and a smaller tail.

“Often people working 70 years ago or more had different ideas of what constituted a new species,” Chris Norris, senior collections manager at the Yale Peabody Museum of Natural History in Connecticut, told BBC News. “Maybe they didn't recognize things that we would as being distinct, or they might not have had access to technologies, such as being able to extract and sequence DNA.”

With the specimen in hand, Helgen next set out to discover whether the olinguito could be living in the wild. Grainy video footage of what might have been a live specimen taken in the Andes led Helgen and his colleagues to the cloud forests of Colombia and Ecuador, where they spotted the furry orange animal living in the trees. Though the olinguito, which weighs less than a kilogram, is carnivorous, it mainly eats fruit. The mammal is nocturnal, lives by itself, and produces a single offspring at a time. The team also reported that the mammal is threatened, with nearly half of its forest habitat lost to construction and farming.

“This reminds us that the world is not yet explored and the age of discovery is far from over,” Helgen told BBC News.