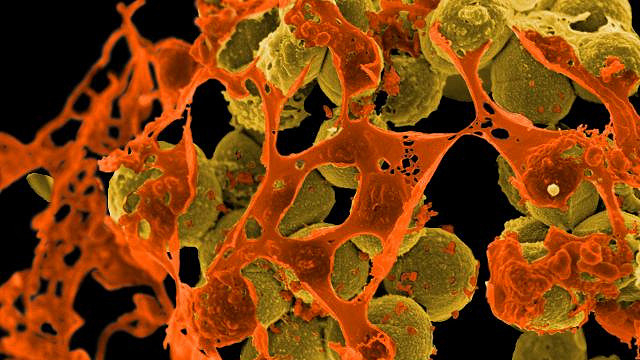 Scientists have discovered a new class of antibiotics that can kill methicillin-resistant Staphylococcus aureus (MRSA) in mice. The drugs, called synthetic retinoid antibiotics, are in the same family of compounds as Vitamin A. In the study, published yesterday (March 28) in Nature, the researchers modified the retinoids to maintain their ability to attack MRSA while minimizing their toxicity.

“The molecule weakens the cell membranes of bacteria, but human cells also have membranes,” study coauthor William Wuest, a chemist at Emory University, says in a statement. “We found a way to tweak the molecule so that it now selectively targets bacteria.”

Under the looming crisis of antibiotic resistance and evolution of “superbugs” that are multidrug resistant, the task of finding new classes of compounds that can be used to fight them is becoming increasingly critical. According to a 2010 study,...

Wuest and his colleagues tested 82,000 synthetic compounds with an assay and found two, CD437 and CD1530, that kill MRSA cells by disrupting the lipid bilayers in their cell membranes. Importantly, the compounds not only killed growing cells but also so-called “persister” cells—ones that have become inactive and often develop resistance to antibiotics.

“We are very optimistic about the way these compounds function,” study coauthor Eleftherios Mylonakis, a molecular microbiologist at Brown University, tells Forbes. By striking at the membrane, the drugs are attacking “a very finely tuned part of the bacteria which is very susceptible to targeting by drugs,” he adds.

The researchers also paired CD437 with gentamicin, a commonly used antibiotic, and used it to successfully treat mice infected with MRSA. The bacteria did not develop resistance to the drugs even after 100 days of treatment.