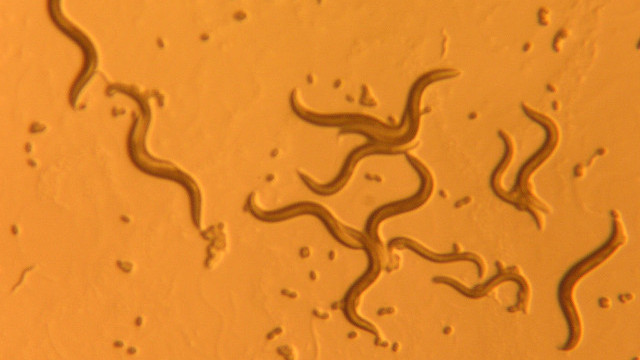 Researchers have discovered a new class of light-detecting molecule, a protein in a family of taste receptors that can capture ultraviolet (UV) light more efficiently than the photoreceptors in the human eye. In a study published last week (November 17) in Cell, an international team measured the light-absorbing capacity of the protein that allows C. elegans nematodes to respond to light—despite the fact that the roundworm is eyeless.

The researchers suspected nematodes could detect light in some manner because they previously found that the roundworms will move away from UV flashes, according to a press release, and they knew that a specific protein, LITE-1, was needed for this response.

“Photoreceptors convert light into a signal that the body can use,” explained coauthor Shawn Xu of the University of Michigan in the press release. “LITE-1 is unusual in that it is extremely efficient at absorbing both UV-A and...

Unlike other opsins and cryptochromes, LITE-1 derives its light-absorbing properties from its conformational shape, meaning that any alteration to that shape destroys its light-sensitivity. After characterizing the shape and structure of LITE-1, Xu and his colleagues discovered that they could transform a related protein into a photoreceptor by adding a few amino acids.

“Our experiments also raise the intriguing possibility that it might be possible to genetically engineer other new types of photoreceptors,” Xu said.