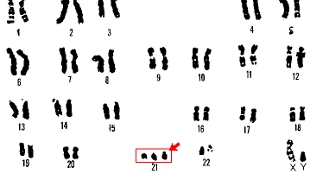 WIKIMEDIA, US DEPT OF ENERGYDown syndrome  is caused by a triple copy of chromosome 21, which leads to a number of cognitive and physical delays. Now researchers from the Sanford-Burnham Medical Research Institute in La Jolla, California, have found a protein that restores some of the cognitive and behavioral disorders found in the disease.

“This particular study is of interest; however, the genetic causes of Down's syndrome are very complex and we are still a long way away from the development of therapeutic treatments that might lead to improvement to cognition in people with Down's syndrome,” Carol Boys, chief executive of the Down's Syndrome Association, told the BBC.