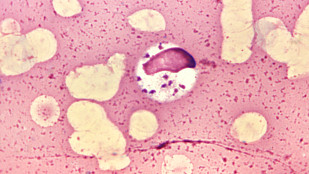 Leishmania donovani in bone marrow cellWIKIMEDIA, CDC/L.L. MOOREA drug that selectively inhibits the kinetoplastid proteasome, called GNF6702, efficiently cleared mice of the parasites that cause leishmaniasis, Chagas disease, and sleeping sickness, researchers from the Genomics Institute of the Novartis Research Foundation in San Diego, California, and their international colleagues reported in Nature this week (August 8). “Our data provide genetic and chemical validation of the parasite proteasome as a promising therapeutic target for treatment of kinetoplastid infections, and underscore the possibility of developing a single class of drugs for these neglected diseases,” the researchers wrote.

In an interview with New Scientist, study coauthor Frantisek Supek of the Genomics Institute of the Novartis Research Foundation said that “the key for this compound is it’s highly selective, just for parasites.”

The target “looks very promising,” pathologist and microbiologist Abhay Satoskar at the Ohio State University in Columbus who was not involved in the work told New Scientist.