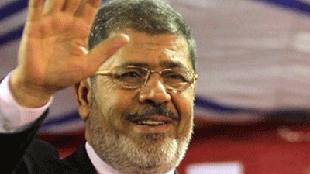 After a contentious and drawn out election process, the votes have been counted, and Egyptians have elected their next president—Muslim Brotherhood candidate Mohammed Morsi. After the popular uprising that ousted longtime ruler Hosni Mubarak, Morsi narrowly defeated former prime minister Ahmed Shafiq in an election that captivated the Middle East region and the world. Morsi holds a PhD in material science from the University of Southern California (USC) and served as a professor of engineering at California State University at Northridge.

During his campaign, Morsi promised to boost science research spending in Egypt to 2.5 percent of the country’s GDP. He also pledged to spend more on higher education, to increase faculty salaries, and to encourage innovation by fostering collaboration between research institutes and industry.

"My vision is for science to be the start of a renaissance in Egypt and for science...

Farghalli Mohamed, a University of California, Irvine, engineer and former colleague of Morsi's at USC, told Nature that Morsi was likely to follow through with his campaign promises. "It is quite possible Morsi's background in science and training in research could help in advancing sciences and technology in Egypt…" he said. "No doubt, this will depend on reaching a state of stability in Egypt that allows ideas to emerge and scientists to work."