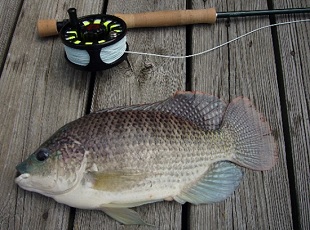 Tilapia mozambiccusWIKIMEDIA, MICHAEL RUPERT HAYESIn 2009, an unknown disease began killing tilapia in the Sea of Galilee and in commercial ponds in Israel, with a mortality rate of up to 70 percent. Just a couple of years later, the same happened in commercial ponds in Ecuador. Now, researchers have identified a new virus that likely caused both of these die-offs, and in doing so have provided the first step toward developing a vaccine, according to a study published yesterday (April 5) in mBio.

“Our research provides the first means of detection,” study coauthor Eran Bacharach of Tel Aviv University said in a statement, adding that “knowing the genetic sequence of the virus is the first step to designing diagnostic and screening assays.”

Researchers discovered the virus while analyzing fish samples from scientists working on both the Israel and Ecuador outbreaks. “This was an atypical viral discovery...

The researchers found 10 short RNA gene sequences, nine of which showed no similarities to any other known viral genes. The remaining segment showed some resemblance to an influenza C virus sequence, leading the team to classify the new find as an influenza-related orthomyxo-like virus called tilapia lake virus (TiLV). The team next plans to use the sequences to begin developing a vaccine, which could “save billions of dollars and preserve an industry that ensures employment in the developing world and food security,” Lipkin said in the statement.