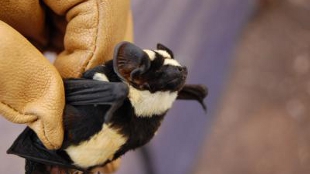 New bat species Niumbaha superbaDEEANN REEDER, BUCKNELL UNIVERSITYIts peculiar black-and-white markings differentiate it from all other known bat species to the untrained viewer—and now a detailed analysis by researchers has confirmed the animal deserves its own classification. Dubbed Niumbaha superba for “rare” or “unusual” in the local Zande language, the bat had previously been spotted in the Democratic Republic of the Congo in 1939, but was misclassified in the genus Glauconycteris. Upon further investigation, DeeAnn Reeder of Bucknell University, who recently discovered a new specimen, and her colleagues decided it was different enough to warrant its own genus.

“Its cranial characters, its wing characters, its size, the ears—literally everything you look at doesn’t fit. It's so unique that we need to create a new genus,” Reeder said in a press release.

Reeder and her colleagues published their findings this week (April 9) in ZooKeys. Only...

“Our discovery of this new genus of bat is an indicator of how diverse the area is and how much work remains,” Reeder said in the release. “Understanding and conserving biodiversity is critical in many ways. Knowing what species are present in an area allows for better management. When species are lost, ecosystem-level changes ensue,” she said. “I’m convinced this area is one in which we need to continue to work.”