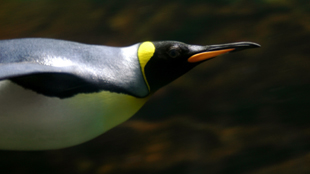 A new giant penguin has been reconstructed from fossils collected from New Zealand in 1977, painting a picture of a uniquely shaped species. Named Kairuku for a Maori word, the language of the indigenous Polynesian people of New Zealand, that loosely translates to “diver who returns with food,” the penguins stood about 4 feet 2 inches tall, with elongated flippers. Researchers used two sets of Kairuku fossils and the modern king penguin (which averages about 3 feet in height) to model its shape.

“Kairuku was an elegant bird by penguin standards, with a slender body and long flippers, but short, thick legs, and feet,” co-author Dan Ksepka of North Carolina State University said in a press release. “If we had done a reconstruction by extrapolating from the length of its flippers, it would have stood over 6 feet...

Kairuku is only one of about 5 penguin species in New Zealand during the Oligocene period, about 34 to 23 million years ago, so it will help scientists understand penguin species diversity during that time, Ksepka added in the release. (Hat tip to Wired Science)