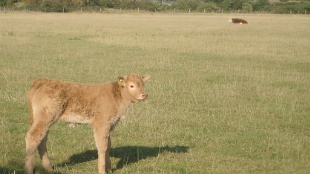 In November 2011, farmers from Schmallenberg, Germany, noticed that some of their dairy cows were feverish and not producing much milk. Not two months later, the virus—named the Schmallenberg virus after the 25,000-person town—has been observed on around 90 farms in Germany and the neighboring countries of Belgium and the Netherlands, affecting adult cows, and also causing stillbirths and birth defects in calves, lambs, and newborn goats.

“We are taking this very, very seriously,” Thomas Mettenleiter, head of the Friedrich-Loeffler-Institute, a German animal health research center, told ScienceNOW. “Now, in some herds, 20 percent to 50 percent of lambs show such malformations,” including fluid sacs in the brain and scoliosis, Mettenleiter added. “And most of these animals are born dead.”

Scientists are working speedily to learn about the virus so that they can create a cure or vaccine. They’ve already sequenced the viral genome and cultured...