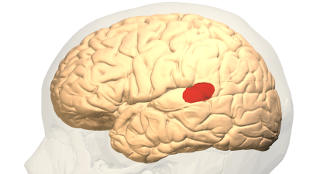 Wernicke's area, long considered the seat of language comprehension in the human brain, may not be.WIKIMEDIA, DATABASE CENTER FOR LIFE SCIENCEThe map of language centers in the human brain is being redrawn. Researchers at Northwestern University have determined that Wernicke’s area, a hotdog-shape region in the temporal lobe of the left hemisphere, may not be the seat of language comprehension, as has been scientific dogma for the past 140 years. Instead, the team suggests in a study published today (June 25) in the neurology journal Brain, understanding the meaning of words happens in the left anterior temporal lobe, while sentence comprehension is handled by a complex network of brain areas.

“This provides an important change in our understanding of language comprehension in the brain,” Marek-Marsel Mesulam, lead study author and director of Northwestern’s Cognitive Neurology and Alzheimer’s Disease Center, said in a statement.

Instead of working with stroke victims, Mesulam and his colleagues studied patients with a rare form of language-affecting dementia called primary progressive aphasia (PPA). Mesulam, who is a leading expert on PPA, realized that PPA patients with damage to Wernicke’s area did not exhibit the same same trouble with word meaning as stroke victims with similar brain damage.

So he and his colleagues performed language tests and brain MRIs on 72 PPA patients with damage inside and outside of Wernicke’s area. They found that PPA patients with reduced cortical thickness in Wernike’s area could still understand words, but had varying degrees of trouble comprehending sentences. None of them had the widespread problems with language comprehension noted in stroke victims.

“In this case, we saw a different map of language by comparing two different models of disease, one based on strokes that destroy an entire region of brain, cortex as well as underlying pathways, and the other on a neurodegenerative disease that attacks mostly brain cells in cortex rather than the region as a whole,” Mesulam said in the press release.

This means that language comprehension is much more diffuse and complicated in the brain, and the process likely relies on many interconnected brain regions, rather than one constrained area. “There is no center but a network of interconnected areas, each with a slightly different specialization,” Mesulam told Motherboard.