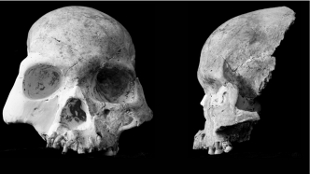 Is this the face of a new human species? A partial skull recovered from a cave in southwest ChinaPLOS ONE

Scientists are proposing that a centuries-old skull and other bones found in caves in China may represent the remains of an ancient human species that was previously unrecognized. They're basing their interpretation, which was featured in a paper published in PLoS ONE yesterday (March 14), on morphological features of the bones that indicate a mixture of modern human traits and archaic characteristics.

A team of researchers from China and Australia determined that the bones, a partial skull that was unearthed in 1979 and jaw bones and teeth found more recently from a nearby site, were between 11,500 and 14,500 years old. They have dubbed the population from which the artifacts came the "Red Deer Cave" people after one of the dig sites. While the facial proportions of the Red...

The authors of the PLoS ONE paper stop short of definitively calling the Red Deer Cave people a new species of human, instead proposing several hypotheses for their place on the human evolutionary tree. They posit that the artifacts could be from a late-surviving archaic population, like those thought to have inhabited North Africa. Alternatively, they suggest that the unusual mix of archaic and modern traits in the Red Deer Cave bones could have resulted from ancestral polymorphisms in a population of Homo sapiens.

Another researcher, Isabelle De Groote, a palaeoanthropologist from London's Natural History Museum, told BBC News that there could be another explanation for the finds. "It's possible these were modern humans who inter-mixed or bred with archaic humans that were around at the time," she said.

University of New South Wales researcher and study co-leader Darren Curnoe agreed that this was a possibility, and his team is working on extracting and analyzing DNA from some of the samples in order to check for evidence of interbreeding between human species. "The evolutionary history of humans in East Asia is more complex than has been understood until now," the authors wrote in the PLoS ONE paper. "It further highlights the need for much more research in the region as a matter of priority."