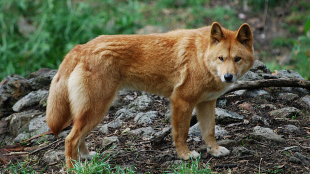 WIKIMEDIA, PERIPITUSDingoes, often thought of as wild dogs, are actually their own group of predator, scientists proclaimed in the Journal of Zoology last week (March 27). “We can also conclusively say that the dingo is a distinctive Australian wild canid or member of the dog family in its own right, separate from dogs and wolves,” coauthor Mathew Crowther of the University of Sydney said in a press release. “The appropriate scientific classification is Canis dingo, as they appear not to be descended from wolves, are distinct from dogs and are not a subspecies.”

Dingoes are thought to have descended from domesticated dogs in East Asia. They were introduced to Australia several thousand years ago and bred in isolation for millenia.

To get a sense of what pure dingoes looked like, compared to dingo-dog hybrids, Crowther and his colleagues examined 69 dingo skulls from museum specimens dating back to...

Crowther said the proper identification of dingoes has practical applications, because policies in Australia support the conservation of dingoes but the extermination of hybrids. According to Reuters, “the scientists think there are still pure dingoes in parts of Australia, [coauthor Mike Letnic of the University of New South Wales] said, but without having the DNA from these old animals, they cannot be 100 percent sure.”