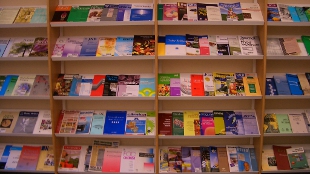 The latest citation statistics for scientific journals came out last week, and the rankings—which track the previous year's citation numbers—include some familiar titles and some surprises. CA – A Cancer Journal for Clinicians topped the 2011 impact-factor list, which is published annually by Thomson Reuters, with a rating of 101.78, retaining its top spot from last year. The New England Journal of Medicine came in second with an impact factor of 53.298, with Annual Review of Immunology and Reviews of Modern Physics following at impact factors of 52.761 and 43.933, respectively. Closing out the top 10 were Chemical Reviews (40.197), Nature Reviews Molecular Biology (39.123), Lancet (38.278), Nature Reviews Genetics (38.075), Nature Reviews Cancer (37.545), and Advances in Physics (37.00). Perennial list toppers Nature, Cell, Science, and the Journal of the American Medical Association came in at 11th, 16th, 18th, and 20th, respectively.

When ranked by their Eigenfactor Score—an alternative, non-commercial metric that points to a journal's influence based on network analysis and information theory that is preferred by some researchers—the top ten titles includes the scientific literature's heavy hitters:

The Thomson Reuters Journal Citation Reports, which include the impact factor-rankings, also names 51 titles that were banned from the latest list for over indulging in self-citation, a way to artificially boost a journal's impact factor. These include Tissue Engineering and Regenerative Medicine and Cell Transplantation, among other (mostly social science) journals.