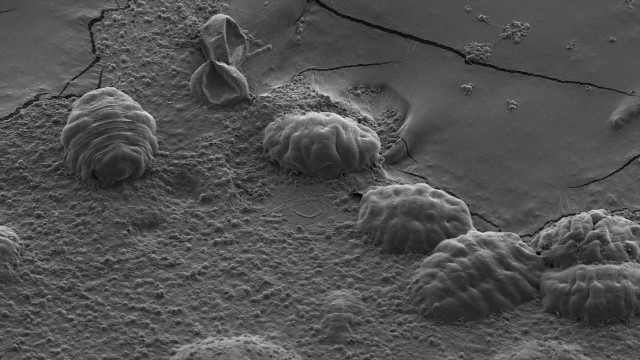 Scanning electron micrograph of six tardigradesTHOMAS BOOTHBYMicroscopic animals called tardigrades have remarkable survival skills, remaining viable after years without water; exposures to extremes of temperature, radiation, and oxygen deprivation; and even a trip through the vacuum of outer space. It’s been Thomas Boothby’s ambition to find out how.

At a talk at the American Society for Cell Biology – EMBO meeting Monday (December 4) in Philadelphia, Boothby presented new data from his investigation into proteins unique to tardigrades that appear critical for the animals’ ability to withstand desiccation. These proteins form a gel, and in low-water conditions appear to preserve other proteins’ folded shapes and protect them from degradation until rehydration.

Previously, Boothby, who is a postdoc in Gary Pielak’s lab at the University of North Carolina, Chapel Hill, and his colleagues identified these proteins by looking for genes that were more active during desiccation. Through a...

In the latest work, Boothby showed in vitro that any one of a handful of these tardigrade proteins (called cytosolic abundant heat soluble proteins) maintained another protein, called SH3, in its folded conformation. SH3, which is common among animals, including humans, normally flips back and forth between folded and unfolded states, but adding a tardigrade protein made the unfolded version disappear. It’s not clear whether tardigrade proteins fold up unfolded SH3 or if they hold folded SH3 in place so it can’t return to its unfolded state, Boothby tells The Scientist.

Examining the structure of the desiccation-resistant tardigrade proteins, Boothby and his collaborators determined that they have a dumbbell-like shape, with two curled-up ends connected by a stringy linker. The ends have predicted binding sites, which perhaps draw them to the proteins they protect.

“What we think is happening is, in a normal cell as water is lost, desiccation-sensitive proteins denature, unfold, and form nonfunctional aggregates. In tardigrades, gels encapsulate sensitive proteins, preventing them from unfolding and preventing aggregation,” Boothby said during his presentation. “Add water, and tardigrade proteins go back in solution.”