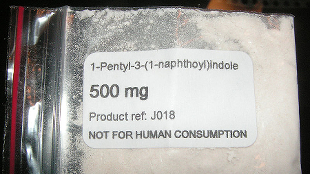 Half a gram of JWH-018, a synthetic cannabinoidWIKIMEDIA, PSYCHONAUGHTThe creation, supply, and use of new synthetic drugs is on the rise across the Western world and governments are struggling to keep track and regulate the variety of substances, according to a report from the United Nations Office on Drugs and Crime (UNODC).

Some of these “designer drugs” have hit the headlines but there are hundreds more on the market, and amateur chemists in professional-standard home laboratories are developing new substances all the time. Indeed, the European Monitoring Center from Drugs and Addiction reported 73 new drugs in 2012—with new substances arriving on the market at a rate of more than one a week.

In Britain, the UNODC report said, almost 700,000 people aged between 15 and 24 have experimented with these “legal highs,” though the report adds that the biggest market is the United States, where use of...

Sold openly on the Internet under euphemistic descriptions such as “bath salts,” “incense,” and “research chemicals” the substances have not been tested for safety and, according the UNODC report, “can be far more dangerous than traditional drugs.” Moreover, while producers have been quick to tap into a lucrative market, law enforcement authorities are struggling to keep up, the report said.