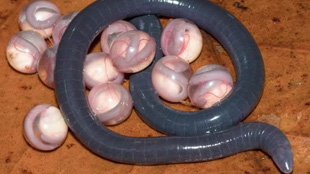 A new family of legless amphibians was discovered living 16 inches deep in the soils of northeast India. Named chikilidae, the family belongs to the rarest and most primitive of the amphibians—the Caecilians—an order of limbless, underground-dwelling, smoothed skin animals that bypass the larval stage of development.

It took researchers 5 years and around 250 digging expeditions to identify the skittish, underground creatures as a distinct and previously undescribed family of amphibians. DNA testing revealed the chikilidae diverged from their closest African relatives around 140 million years ago.

Reporting in the journal Proceedings of the Royal Society B, the researchers describe

the chikilidae as hard-skulled worm-like amphibians fit for drilling into hard soils. "It's like a rocket," Sathyabhama Das Biju, a herpetologist at the University of Delhi told the Associated Press. "If you miss it the first try,...

The chikilidae grow to up to 4 inches in size and will go without food for as long as 50 days in order to remain with their eggs until they hatch.

"We found them not only in the forest area but also very close to human settlement," Biju told BBC News. "So conservation of this group is extremely challenging."